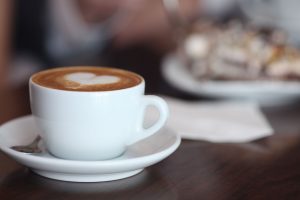 From Baristas to Owners of the Shop

They are not called Figure 8 “Roasters” or anything else. They are called “Purveyors” because they do that exact thing: purvey different coffees. Ryan and Kathleen had been local baristas for around fifteen years before beginning their own store, and when they did, they not only took their expertise from prior employment experience, they took their friendships.

One place that they previously worked was Houndstooth Coffee, and with that established relationship, they regularly procure roasted beans from Houndstooth and Houndstooth’s roastery, Tweed’s.

Figure 8 Coffee Purveyors always features a rotating cast of roasts that they gather from largely the west side of the country. A glimpse at their website will show you their current list, which at this time features a roast from Texas, two roasts from Oregon, and one from Washington.

The form that they purvey these roasts is of course as beverages. Figure 8 is always changing what roasts they feature, with the goal of never allowing their customers taste buds grow bored. This also allows for their various beverages to remain in simple, standard forms, yet still unique.

Try a Kalita Wave Pour Over

They serve coffees ranging from mochas, macchiatos, lattes, americanos, and uniquely, Kalita Wave pour overs. A benefit of the rotating roasts is that you could order your favorite style of drink, and continually mix it up if you so choose, through using a different roast each time.

Of course, it should not be left out that they also serve both hot and iced teas, from ginger rooibos to peppermint and Eastside earl grey.  Figure 8 has become part of the coffee community by forming connections with the roasters they feature, but they have also created a community surrounding their shop.

Allowing people to feel welcome and familial is one of their central focuses. With the help of their friends, Ryan and Kathleen took the bones of the store that once inhabited the building they have adopted and transformed it into the home of Figure 8 Coffee Purveyors.

Not Too Fancy but Really Cool Decor

Aiding in creating a welcoming environment is that they have metal stools placed right up to the bar, so communication is common and comfortable. The store keeps a do-it-yourself look, with nothing being too fancy, and some parts being quite cool, such as the conveyor belt converted into a table.

Most walls are white brick, but both the walls and ceiling surrounding the coffee bar itself are dark blue. Also garnished throughout the inside of the store, as well as out front and in the back patio, the whole of Figure 8 has a vintage feel.

That feel goes beyond looks, however, as Figure 8 keeps vinyls on rotation, appealing to the local indie and hipster scenes. If you find yourself in eastern Austin, seek out Figure 8 Coffee Purveyors.

It is easy to spot, with both the coffee related words painted on cement slabs outside and its logo emblazoned on the front of the building.