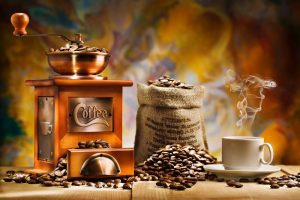 In 1932 a young man by the name of Anthony Polcari immigrated to the United States from Italy with one dream. He wanted to start up a coffee store. He worked at a tailor shop in Boston to save up the money he needed to open his shop.

Anthony’s dream was realized in the form of Polcari Coffee and it has been a family-run company since he opened the doors of his little shop on Salem St. in Boston almost 100 years ago.

Anthony’s wife and three children helped him run the shop until he passed it on to his son Ralph.

Ralph dedicated his life to the little shop and never had children. One of his employees, Bobby, mirrored the Polari’s passion for coffee. In 2005 Ralph passed the family business on to a member of the store’s family and Bobby has been running it ever since.

Polcari’s Coffee sells a wide variety of items and is similar to an old generation grocery store or general store. On the shelves of the shop, you will find imported spices which they sell to chefs in the Boston area. You will also find a plethora of teas including loose-leaf and organic varieties.

In addition to spices and teas, there is a wide variety of deli meats, candy, snacks, herbs, extracts and oils, pasta, nuts and cooking beans. They specialize in Italian snacks and candies such as Puntini Frutti Assortiti chips and Italian white superfine almonds. You’d be hard-pressed to find as large of a selection of Italian goods anywhere else in Boston.

They Offer A Great Selection Of Coffee Beans

They have some popular blends that customers love like Mr.Polcari’s house blend and the Italian roast expresso. Of course, you can also find organic roasts, decaffeinated beans, flavored coffee and regular coffee beans. Everything they sell they will sell in bulk or small orders.

This Shop Is Known For Welcoming Italian Family Feel

Polcari’s Coffee is friendly and welcoming. Their customer service is stellar, and they ship their beans and products across the United States. There is only one location, the original shop on Salem St in Boston.

The owner strives to keep the atmosphere and the family feel the same as it was when it was passed down to him by the Polcari family. There is an authentic Italian atmosphere to the store, and it feels like you’re stepping through time to old-world Boston.

There’s No WiFi In This Old-Fashioned Coffee Shop

Everyone who enters the store is immediately treated like family by the owner, Bobby, and he takes time out of his day to talk to everyone who walks in. It’s a slow-paced and you’re not going to find wi/fi here. The walls are covered in pictures of the history of the shop and the store smells like spices, wood and delicious coffee.

If you’re looking for a fantastic selection of coffee beans, teas and other assorted snacks and confectionaries then Polcari’s Coffee is the perfect place to go. Visit the shop when you need a friendly conversation, an old-world atmosphere and the best coffee beans in Boston!