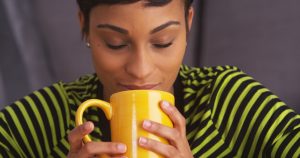 Tandem Coffee Roasters is a specialty coffee business and cafe with two locations in Portland, Maine. The two locations have distinct features, and actually have different, self-explanatory names. Will and Kathleen Pratt opened the first location in 2012, which is known as the Tandem Cafe and Roastery. Learn about how coffee affects your sleep here.

How the Name Came About

The couple met working for other coffee serving businesses in New York, and after relocating to Maine, noticed a tandem bicycle rolling down the street. Ever since seeing that, they have fashioned the bike into their logo and name.

While it is a fitting name for a cafe run by a couple, in 2014, they brought on their friend and resident baker, Briana Holt, to open a new location, known as the Tandem Coffee + Bakery.

The 2nd Location is Also a Bakery

As the two locations’ names imply, the original location is where the bean roasting occurs, and the second is the hub for Briana’s baking. The other central difference between the two is that the original is half the size of the bakery, at only one thousand square feet.

Not only is the bakery bigger in size and available seating, but because of where it is located, the owners have noticed that it tends to be a more popular choice.

However, what customers have available to them is largely the same at each spot. This extends beyond consumable offerings, as the locations are both fitted with a modern style.

They Have a Warehouse Exterior and Artistic Interior

The roasting location was once a warehouse, and the bakery formerly a laundromat and gas station, so the exteriors are different, but the interiors are both artistically drenched in off white and decorated with colorfully painted patterns.

The floors are smooth concrete, and most of the tables and chairs are made of light-toned woods. It is all very minimalist in nature and fits in with most coffee shops of Tandem’s generation.

Their Goods Are Quality and Green

As for the goods served, the coffee is not in the broadest and most creative of selections, but it is of high, green quality. The espressos, lattes, mochas, cappuccinos, and black coffee brewed in most methods you can imagine are made with beans that often advertise their source.

Tandem acquires their coffee from Ethiopia, Guatemala, Costa Rica, and more, and occasionally, these are specifically worked into the baked goods, not so bluntly stated as “coffee-flavored etc.” but labeled with the specific coffee used to make, for example, the frosting of a cake.

The seasonal pies are the go-to baked good, but there are also ice creams, cookies, scones, and much more. The coffees and baked goods are offered in other stores through wholesale partnership as well, but if purchased in store, Tandem is newly striving to rid of singular-use items such as straws and cups.

As of 2019, they reduced all beverage prices by twenty-five cents, and now charge that amount for a to-go cup. They hope to motivate people not only to be conscious of their impact on the environment, but also to enjoy things in the moment, rather than on-the-go. Plus, at the roastery, you can sit and watch them cup and roast on Fridays, for free.