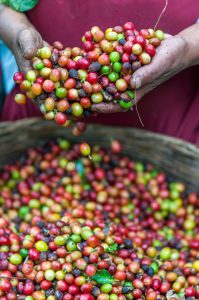 One of the most labor intensive jobs out there is coffee cherry picking, specifically in Colombia. Because coffee over there grows in an uphill elevation, picking it becomes even harder. With over 1.6 hectares of land to work, the task is almost deemed as impossible for the typical worker.

How The Day Starts For a Colombian Coffee Cherry Picker

Starting off with waking up early in the morning, the pickers are ready to begin their work by sunrise. Coffee cherry pickers work in teams, and they meet up with their other team members in the mountainous coffee fields.

From there, work begins in the mountainous fields. They all set out to work for around twelve hours, from sun up to sun down.

A lot of the hard work that coffee pickers put in involves separating the red coffee cherries (which they have to pick) from the unripe, green cherries.

Are Pickers Paid A Decent Wage?

The worst part for Colombian coffee pickers is that they get paid per kilo, so they have to pick a nice amount of cherries to make a somewhat livable wage.

They put in hard, grueling work for several months on end. Despite that, coffee workers still put in backbreaking, long hours and dream of one day owning a coffee farm themselves.

Even worse, the wages are lower than average, lower than minimum wage in the United States. Many people don’t want to take on the job of coffee picking.

And that’s simply because they’re largely underpaid, with one coffee picker earning $80 a week, despite the perilous work of climbing steep elevations to pick fruits.

When the coffee baskets are full, the workers take them to the collection site, where there is a trailer to dump their baskets.

From there, the worker’s basket is recorded, as the workers are paid based on how many baskets they fill up, as well as the quality of the coffee cherries.

They have to make sure that the cherries are red, and not green. The only problem is, baskets might be limited for a cherry picker working in treacherous working conditions.

It’s only when we realize the hard work and time that these workers put in every single day, that we can truly appreciate the little things in life.

Even though coffee cherry pickers don’t have the best working conditions, and are underpaid, they still put in the effort of picking the most quality coffee cherries to be served in coffee shops, for the customers.

Many coffee pickers have developed different skills and attributes that allow them to consistently pick a nice amount of coffee cherries. Patience is gained through deliberate hours of nitpicking red coffee cherries from green ones.

Even though it’s hard work, pickers are still proud of what they do. It would be nice if we could show them our gratitude and appreciation for the great cups of coffee that we enjoy every day.

If it’s affordable for you, try to buy Fair Trade coffee. This will ensure that workers are paid better and treated more fairly.