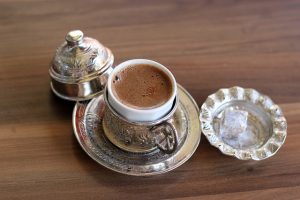 Turkish coffee is a highly prized coffee beverage in the nation of Turkey, the Middle East, and within various parts of the world.

Many people like the taste of Turkish coffee, because it has a well-balanced taste. Most Turkish coffees are sweet, and a few flavors are bitter.

Still, the overall taste of many Turkish blends is derived from sugars and other flavorings that have been added to the drink.

To figure out which types of foods work best with Turkish coffee, we will have to go to its source. Turkish people normally consume sweets with Turkish brew.

Traditional Turkish foods, such as Turkish Delights, are often served with the coffee. Turkish Delights are a type of gel-like confection that has plenty of flavor, but its not too sweet.

Turkish people eat a lot of seafood, and they grill a lot of meat, such as lamb and beef. They also eat a lot of vegetables.

The sweet coffee of the Turks typically does not blend well with these types of cuisines. So, many Turkish people do not drink coffee with their dinner or lunches.

However, they might have them before or after a meal. Strange as this might sound, Turks generally do not drink coffee with their morning breakfast. They drink tea instead.

The Turkish word for breakfast is “kahvalti”, and it means “under coffee”. In other words, once a Turkish person is finished eating their breakfast, that is when they drink coffee.

They also drink it during the afternoon, before lunch. Some Turks will drink coffee with their meals, but most don’t. Once again, this might seem unusual to westerners, but for the Turks, this is how things are done.

Turkish Coffees With Foods In Other Parts Of The World

Turkish coffee is paired with pastries in other parts of the world. Local coffee shops will sell a variety of pastries, such as chocolate brownies, donuts, danishes, or scones with Turkish coffee.

Many people who consume Turkish coffee will also drink it with items such as bread and cheese, fruits (like grapes or strawberries), or they will consume it with sweetened chocolate candies, or vanilla flavored confections. Keep in mind that some sweet breads, such as cinnamon rolls or raisin breads, are also paired with Turkish coffee.

Turkish coffees are not generally consumed with main dishes. They have not been designed for that purpose. Many people like drinking this variety of coffee by itself, or with some type of regional dessert that is from their culture.

Traditional Turkish coffee is often enjoyed in a stand-alone manner, because people like to focus on its taste, without a pastry or food distracting them.