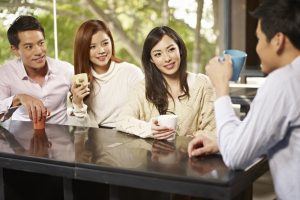 Coffee first appeared in Japan through trade with Dutch and Portuguese merchants during the sixteenth and seventeenth centuries. By the end of the 1880’s, Japan was introduced to its first coffee shop. Since then the use of coffee in Japan has begun to nearly compete evenly with that of the various types of teas, which are the most highly consumed beverages in Japan.

Today, the Western habit of drinking coffee has taken Japan by storm, so much so that the two largest American coffee brands (Starbucks and Dunkin’ Donuts) even conduct business in the Far Eastern country. PS Costa Ricans use Chorreadors to brew their coffee!

How Popular is Coffee in Japan?

Japan is the third largest coffee-importing nation in the world, behind the United States and Germany, and therefore, the largest importer of coffee in Asia. Compared to people living in the Western world, the Japanese consume considerably less amounts of coffee per week.

A study done in 2014 showed that where the average American would typically drink around 16-24 cups of coffee per week, the Japanese intake of the beverage is around an average of 11 cups per week.

How is Coffee used in Japan?

Alongside tea, the country’s most widespread beverage, coffee in Japan is also used as a means for socializing and treating guests with, especially in business settings. Outside the office, coffee shops have taken a tremendous hold in modern Japanese culture wherein cafes are considered a third space in a person’s life outside their home and workplace.

Coffee shops are also particularly favorable in Japan in the sense that they are used as places to hang out with friends or even by oneself. Thus, Japan uses coffee in the same relative manner as the American population does, just at a less rapid pace in consumption.

How do the Japanese Make their Coffee?

The most popularized ways of making coffee in Japan are done by using a drip or filter method. Instant coffee is also highly consumed in Japan and is viewed as a common formality to treat business guests with; canned coffee has also become a Japanese specialty.

Canned coffee was invented in Japan in the 1960’s. It was released in 1969 and since then they have worked on improving this product by adding milk or flavorings and even coming up with hot canned options.

Decaffeinated coffee, boiled coffee, and brews done by using an espresso machine are perhaps the least popular ways of making and consuming coffee in Japan.

Coffee Use and Consumption in Japan Vs. Western World

Japan very much views the consumption and social benefits of coffee in the same manner the Western world does. Being the third largest importer of coffee world-wide, the country of Japan consumes coffee in the same social manner as Americans do, although the Japanese do not drink nearly as much on average as the American populous does.

However, by becoming more reliant on the uses and benefits of coffee shops and cafes, Japan has become the largest consumer country of the Westernized beverage in all of Asia and second in all of Eurasia behind Germany. Today, the Japanese cities of Tokyo and Kyoto are home to many coffeehouses that serve both domestic and international blends.