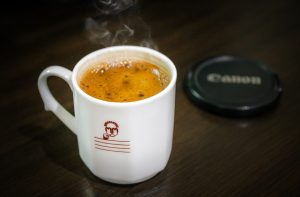 Turkish coffee is another delightful indulgence, just like the famous “Turkish Delight” confections. The land of Turkey is where Turkish coffee has its origins, and it is among the best tasting coffee drink on the planet.

When people consume this drink, they generally prepare it according to a traditional method. However, some people add a wide variety of spices, and other flavorings to make their own unique version of their best Turkish coffee.

By the way, there are no particular spices that people should use for this style of coffee. People can add whatever type of spices to their Turkish coffee drink that tastes best to them.

While people have a preference for the types of spices they will use, there are some regular spices that individuals often include in their Turkish coffee. Let’s take a look at those Turkish coffee spices to find out what they are.

Traditional Turkish coffee is prepared in a ibrik, or cezve. The ingredients (and spices) are added to the coffee before it is brewed.

After the ingredients have been added, they will be slowly brewed to form the taste of this drink. The only thing that is naturally added to most Turkish coffee blends is sugar.

Cardamon, cinnamon, cloves, nutmeg, and vanilla are considered the most common spices used in making Turkish coffee. These spices are known as sweet spices, because their flavor is often enhanced with sugar.

Since Turkish coffee is a sweet drink, these spices make the best ingredients to add to the coffee, especially the ones that aren’t enhanced with sugar. Otherwise, it might become too sweet.

Cardamon is a very popular type of spice that is added to Turkish style coffee drinks. This particular spice has its origins in India.

Turkish coffee drinkers added this spice to their beverage hundreds of years ago. It is the most common spice added to Turkish coffee. Cardamon grows in the shape of a pod, and it has seeds.

Cardamon is sold in different varieties. The green type is most common, and has the sweetest taste. The black, white and red varieties are called True cardamom, and the taste is slightly bitter.

The seeds are generally ground up before they’re added into Turkish coffee. People typically do not ground them, but put whole cardamon seeds into the ibrik, because they don’t dissolve during the preparation process.

Cardamon is also sold in a powder form. However, grinding this spice is not always necessary. The pod/seed has plenty of flavor to offer.

Cinnamon is another spice that is frequently added to Turkish coffee, but it isn’t added all of the time. However, they use it frequently enough to be considered for discussion.

Cinnamon has a naturally pungent taste, so it isn’t very sweet. However, it becomes sweet when sugar is added to its flavor. People that use cinnamon in their Turkish coffee will typically use sugar to bring out its taste.

Sugar is often added with cloves to keep the coffee taste from being too bitter. Other spices, such as nutmeg and vanilla, are used as well.

Nutmeg has a unique taste that is often mixed with sugar to bring out its flavor. The more sugar that is mixed with this spice, the sweeter it becomes in taste.

Nutmeg And Vanilla In Turkish Coffee

Vanilla is considered by many to be the king of spices. It is a premiere spice that is rated among the best on the planet.

This spice doesn’t have a naturally sweet taste, until sugar is added to it. Then, it is transformed into something magical. Vanilla spice is also highly rated when it comes to making Turkish coffee drinks.

When the right amount of sugar and vanilla is added to a Turkish coffee drink, it will transform it into an amazing brewed beverage.

There are many different types of spices that can be included in this drink. Any spice that can be enhanced by sugar should be selected for Turkish coffee.

Remember, Turkish coffee is strong and robust, but its sweetened flavoring is what gives it a distinctive taste.