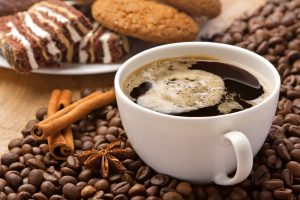 The former owner of Arbor Lodge was Scott Davidson, a former realtor. Scott is an active community member, and when he wanted to open the coffee shop, in 2011, a lot of neighbors pitched in and helped with the painting and preparation work.

Scott managed to build a real community base.

However, in 2017, Scott moved on to become co-curator of Basalt Blossom, a project just outside Portland that “offers transformational encounters with nature.”

Also check out Where Can You Buy Ethiopian Coffee K-Cups?

A Cafe Loved By Its Community

Charles joseph Spielman, the founder of Tanagers Coffee, who still worked as a barista at Arbor Lodge, took over the outlet. He had worked at Arbor Lodge since it opened in 2011.

Tanagers decided not to change the community feel of the outlet, and having worked at the coffee shop for so long, and he understood its history and ethos. Obviously, Tanager wanted to change the emphasis to highlight the Tanagers brand, and some changes were made.

The Coffee Shop Has Plenty of Seating

From the outside, the coffee shop is a brick-built structure with dark green paintwork. There are three or four picnic benches outside offering extra seating. Once you get inside, there are plenty of tables crammed in, allowing space for those wanting to work. The store is about 800 square feet.

Arbor Lodge Coffee shop is still very much a community space. The community in North Portland has been changing, with some businesses moving out and new ones moving in. Arbor Lodge has attempted to become a point of stability in the community.

Tanager Coffee Is Heavily Involved In the Production of Arbor Coffee

Tanager is also heavily involved in attempting to improve the life of producers as well. Tanager was involved in a project to rebuild a football pitch in a coffee-producing community in El Salvador.

Much of C.J.Spielman’s coffee shop ethos is what he learned from Scott Davidson, the former owner of Arbor Lodge, who taught Spielman a lot about the business and how to run it ethically.

It is hard to separate Arbor Lodge and Tanager when talking about coffee as the two businesses are so interdependent and interconnected.

Tanager is a micro-roaster and roasts their coffee at the Aspect Coffee Collective share roasting facility.

They use the communal 12-kilo Probat to roast their beans. The collective also acts as a place where mini-importers can network and co-operate.

The Coffee is Imported From South America

Tanager roasts the coffees sold in Arbor Lodge. C.J.Spielman makes an effort to visit the coffee growing areas at least twice a year to maintain solid relationships with coffee growers in El Salvador, Colombia, Guatemala, and Nicaragua. These direct relationships account for over 75% of the beans that Tanagers roast. The remainder is sourced from Y El Tucan and Red Fox Coffee Merchants.

The Arbor Lodge is a famous coffee shop and has a great atmosphere. The staff is both amiable and knowledgeable about coffee. They obviously carry the full range of Tanager coffee, together with a wide variety of pastries and baked goods.

It amazes me how, compared to other businesses, coffee shops often seem to have a great ethos where they show concerns for the community and their suppliers. You do not find this in other companies.

The Arbor Lodge continues the aspirations of its founder to be an ethical coffee outlet.